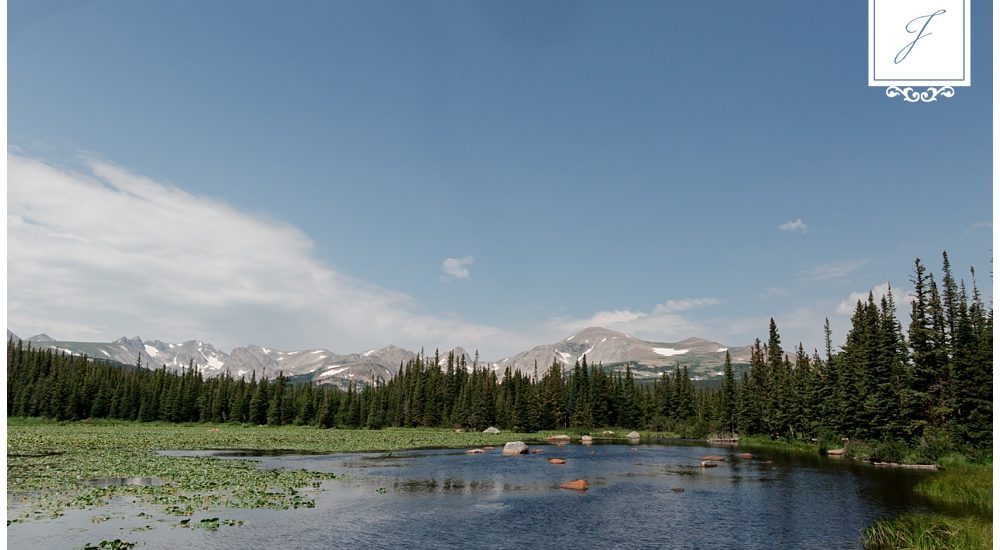 This post might be a little late BUT better late than never. Clear back in August Aaron and I took a 5 day mini road trip around Colorado. This was baby girls first grand adventure but only a few people knew that she was on the trip with us as well.

When we first landed in Denver it was flat as flat could be. I was shocked! I had no idea Denver wasn’t all mountains and there was nothing around the airport either. It looked quite desolate.

Needless to say we high tailed it out of there as fast as we could and drove till we found the mountains. It’s hard to tell in the photo of our feet but the riverbed shimmered in the sun. I have no idea if it was real gold or fools gold but it sure looked lovely in the sunlight.

When we picked up our rental car, we had asked the guy behind the desk how to take the back roads to our first stop that evening. He looked at us kinda funny and said to take the highway and that it was the only way there. *insert eye roll If you follow our adventures at all then you might notice that we don’t really take the highway. Sure enough, Aaron mapped out a route that took us through some lovely countryside.

Our first stop on our road trip was only a 2 hour drive via the highway but by taking the backroads and stopping for photos it took us a few hours longer. After a visit with an old friend, we hit the road the next morning and stumbled upon the most ramshackle little town. It was incredibly interning to me though so I HAD to photograph it.

Our next stop that day took us to one of my favorite spots on the trip.

This lovely lake was so peaceful! These two artists were chatting it up and it made me smile for some reason.

Favorite view of the lake. It might have meant going barefoot in 50 degree weather to walk through the marsh but it was worth it!

I have no idea how we covered as much of Colorado as we did in those few days. Not to mention, I was just coming out of my three weeks of morning sickness. Our final stop on the second was was in Estes where the Rocket Mountain National Park entrance is. The rest of our day was spent driving around the park.

I might have made a few friends along the way.

We took a photo for the sweetest older couple so they took one for us. <3

Let’s play “where is Waldo.” Can you spot the elk?

When we began our track into the park, it was in the 60’s. By the time we had hit this portion of the pass it was 32 degrees. It went from rain to snow then as we rounded the bend it all stopped, the sun came out and this double rainbow appeared. It took my breath away for sure!

This is the closest I have ever been to a bull moose. I have waited YEARS for a photo of one. After all of Aaron and I’s travels to New Hampshire I hadn’t seen a bull moose. All my dreams came true in Colorado.

I also saw this pretty lady but she was much closer to the road for a better photo.

Oh the baby guys… be still my heart!

By the time we finished our drive through the Rocky Mountain National Park it was dark and I was a bit hangry so we turned in for the night. As we left for Denver the next day, Aaron decided to head to the state game lands.

Another “where is Waldo” one for you. This little head is an antelope.

Second coolest weather moment on the trip… We had stopped on the side of the state game lands road to eat lunch and the view below had me in awe. It was still sunny at our car but between us and the ridge in front of us, was a rain storm. We could see the rain falling and thought I didn’t capture it, there was lightning too.

I couldn’t share this photo when we were there but this was my first bump pic. We made a little over a mile hike start up the rocky trail to Hanging lake.

Aaron was super bummed he couldn’t swim in the lake but apparently by swimming in it, the lake was loosing it’s lovely blue/green color.

As I am writing this post now I have totally forgotten the name of this lake but the water was clear and beautiful!

Let me just pause here and tell you how much I adored all the dilapidated buildings and ramshackle little towns we passed. I have had a love for the west since I was a little girl. Maybe it all started with Little House on the Prairie. Maybe it was all the western mysteries I read. I have no idea when it all began but taking those back roads and seeing these old homesteads and abandon mines made all my dreams come true.

We were trying to make it to Denver so we could take the train up Pikes Peak. That didn’t happen my friends so instead we backtracked to a little town and took a lovely little train ride around a mountain and back down. Though the views weren’t as lovely as it might have been heading up Pikes Peak, the little town below and it’s mountain range were still nice.

On our way out of town that evening, we came across the perfect abandon homestead and mine. I was in heaven!

Once we hit Denver it was dark and my flight left early in the AM so the rest of the travels were rather uneventful. Before I sign off though, I wanted to share something that you all might giggle about. As a little girl I was in-love with the Sinclair gas station’s dino. I haven’t seen a Sinclair station in year but they are alive and well in the west. Aaron made sure “the baby” had a dino to take home from our travels. 😉