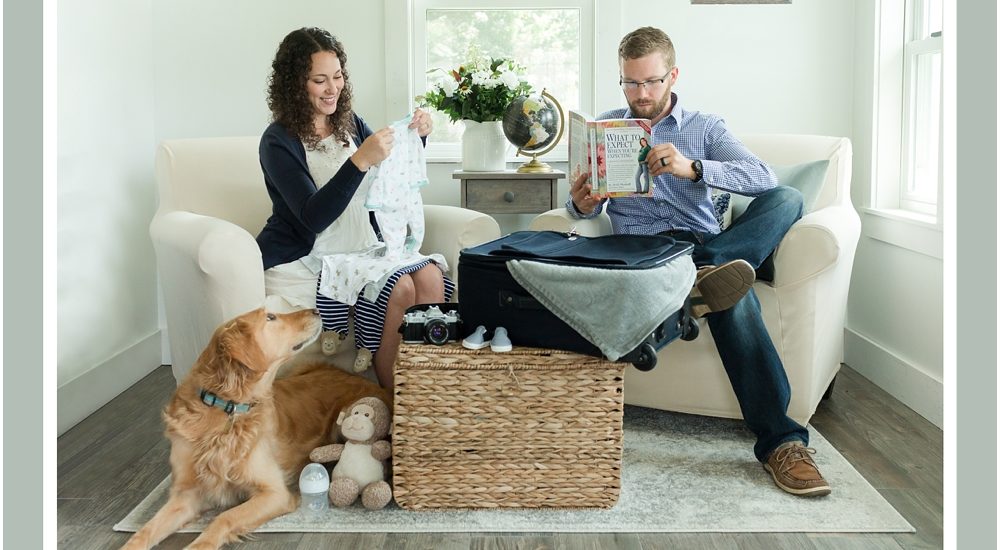 In August Aaron and I announced that a little bundle of joy will be joining our home in March. Our announcement was posted on Facebook and Instargram but I’m just getting around to posting about it on the blog. Better late than never I suppose. Since then we have had so many questions so today I’m posting a little more behind the scenes of our travel adventure themed pregnancy announcement and some Baby J FAQ.

– I’m sure this was planned since know how planning oriented you are.
Yes, this little one was as planned as you can be with these things. We had to be so careful with wedding season. It’s crazy how having a baby not only had to work around our lives but over 20 other girls lives too.
– Do you want a boy or a girl?
Well, if you have been following on Instagram or Facebook, you know that cat is out of the bag now. We will be welcoming a sweet baby girl into our home.
– How have you been feeling?
Friends, please don’t hate me but I have felt pretty good. Thankfully I was only sick for about 3 weeks in July and they were three rather chill weeks oddly enough. I found ginger capsules about 2/3 of the way through the morning sickness and they saved my life.
– How is the nursery coming along?
Ahhhh nursery? Welllllll since that room is still my office at the moment, I would say not at all. Oops! We have plan for her room we just haven’t had all the time in the world for it. We do however have half the furnishings tucked away in the basement and attic for her room.
– What has been your oddest craving.
Oh boy, I really have been a rather normal eater. I usually know what I want when I hungry. I have been INLOVE with cheese or anything cheddar flavored though. I did do the whole pickle thing the first trimester and now in my second, I greatly enjoy Chick-fil-a fries. YUM!
– Have you felt her move and kick?
Yep, my first flutter was at 12 weeks while we were camping with Aaron’s family. My next one wasn’t till much later on but it’s been so neat!
I had no idea what to expect when I would be expecting but so far I have loved almost every minute of it. That is a good thing because Mr J would like a whole houseful of little Jackson’s. I might be singing a different tune though when I can’t see my toes and feel like a beached whale.

So for those who were curious, this was one of my first bump pics. Despite being a photographer, I’m not really into the bump pics. When we announced the arrival of baby J, so many people were curious about the times in the photo. Most missed the due date on the wall as well so here are some close-up pics.

The photo behind me on the wall was taken on our honeymoon, the frame on the other held our due date. Since we travel and adventure quite often, an adventure theme seamed the most appropriate. The little baby items are things that have been gifted to us and since I ADORE navy blue, most things were naturally blue.

Last but not least, big brother Duke the golden. This sweet pup has been enjoying all the baby things arriving in the house however I think he believes they are his. I guess he and baby J will have to talk about that one.