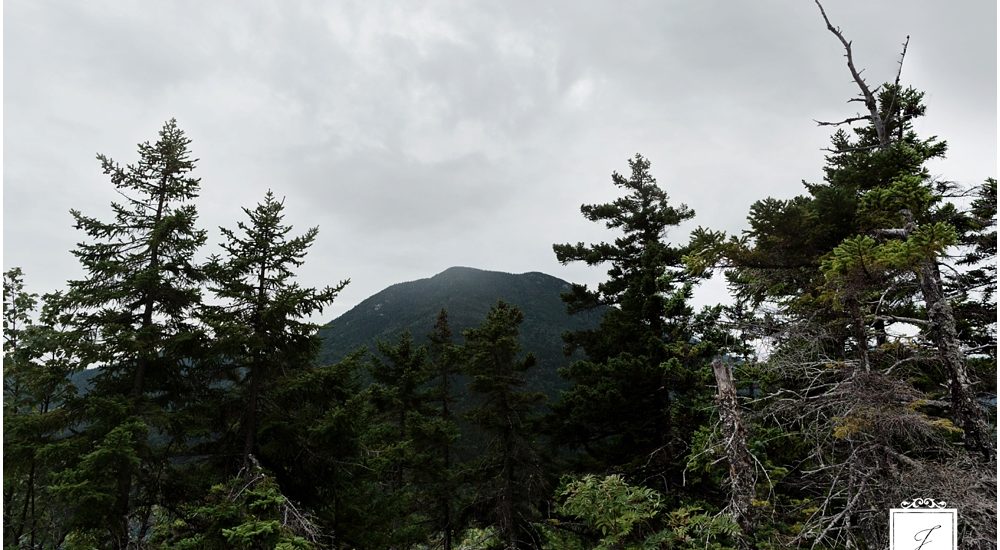 Another load of wash has gone in the washer and with it goes the smells of camping. Over the last week, Aaron and I spent some time in New Hampshire visiting family and camping. Cell phone service was non existent where we camped and did most of our hiking but I didn’t mind it one bit. It was nice to “un-plug” and get away from the dings and chimes my phone continuously gives me. We hit the road on a Friday and by late that night, we had reached Aaron’s grandma’s house.

This was Duke’s sleeping position for most of the trip. Goodness that kid can sleep anywhere!

We spent that weekend with Aaron’s family. It was the family reunion and we try and make it up there every other year to see everyone. This was either my 4th or 5th trip there but I lost count. Either way, it’s nice to connect with Aaron’s mom’s side of the family aside from Facebook.

By nightfall Sunday we had reached our camping spot in the White Mountains and our favorite site, number 14, was available. So we quickly set up and started a campfire.   Camping in New Hampshire had begun! Our view in the morning was forest all around. It was perfect!!

Monday was a chill day. After three weeks of 4-5 hours of sleep each night and long work days, we were lazy all day long! A little river walk, a few games of corn hole, hammock relaxing and anything else that required little to no effort was done that day. We did make a breakfast exception… yummy bacon, eggs and gluten free muffins.

Someone LOVES the water…

OMG Duke shaking off!! These photos make me laugh so hard!!!

By Tuesday we had to get out and about and we were not letting the rain stop us. We picked a trail in the White Mountains called the UNH trail and we “thought” it would be a little under 4 miles. Little did we know that it would be 5.5 miles long and rather steep.

Over the years I have hiked a good bit but never a mountain like this! I was dying BUT the views were just breathtaking! I reached the first ledge, about halfway up, and I just stopped and cried. As much as I love photography, the camera just can’t capture all of the beauty that has been created for us to enjoy.

The woods were silent as we hiked; like an eery silence. The kind that makes you wonder if you are about to get eaten and all the other critters have scattered or like you are the only one up there to make noise.

We FINALLY reached the top!!! I was starting to think we never would!

I’ve never felt so small in my life. Here we are at the top of this mountain and still towering over us was another mountain. Taller and more impressive that the one we just climbed. The air was still. The forest around us silent. The rain loomed over head and the sun hid behind the dark sky. I can’t even begin to express how I felt up there but it was amazing!!!

Duke was pretty pooped by the time we reached the top. His tail hung low and his tongue too but he was loving it and lead the way down and around the mountain just as he had on the way up. Talk about a champ!

After our wild adventure on Tuesday, and all of my aches and pains, we only mapped out a short hike for the day on Wednesday. I snuck a mid day camp photo too of our new little camper and rain proof set-up.

Each spot we found and every adventure we took lead us to the most beautiful landscape. From towering mountains to rushing streams, New Hampshire is a wonderful place. Even areas I had been to before there seamed to come alive more and more to me on this trip. Maybe it’s because I have been trying to find more time to enjoy and be thankful for all that God has blessed me with. Maybe it’s because I was finally still. Maybe it’s both of those reasons. Either way, it was spectacular!

I have no idea why but this little house intreated me and all I had was my iPhone to take its picture.

The tallest mountain peak is called Mount Washington. It’s a part of the White Mountains that I had no idea it was even there. After all the other trips, Aaron finally introduced me to it this time and about mid way up, I found the most charming old train station.

The vacation portion, four days, of our trip was coming to an end. So we headed out on one last trail and it too didn’t disappoint.

Just look at his little face!!! It’s Duke the cutest!!!

Someday I am going to take a whole day of our vacation and go around photographing the little towns and homes of New Hampshire. The whole New England area, or at least what I have seen, has the most charming architecture. It’s a classic colonial look with cozy cottage accents. I feel quite at home if you couldn’t guess.

Maybe someday rather than moving south, we will move north into the heart of New England with a home perched on a mountain top deep in the woods. Maybe I will find my version of a “beach house.” A cliffside home with a large four season room facing the ocean. A “his” and “hers” adirondack chair sitting out on the lawn angled just right to watch the waves roll in. Sigh… someday maybe.

Ooh and our adventure was not over when we packed up on Friday. We joined Christina and Greg in New Jersey for their engagement session! Yes, and a few bears too! Stay tuned for their session!!!

Well we hope you have enjoyed our camping in New Hampshire adventure!